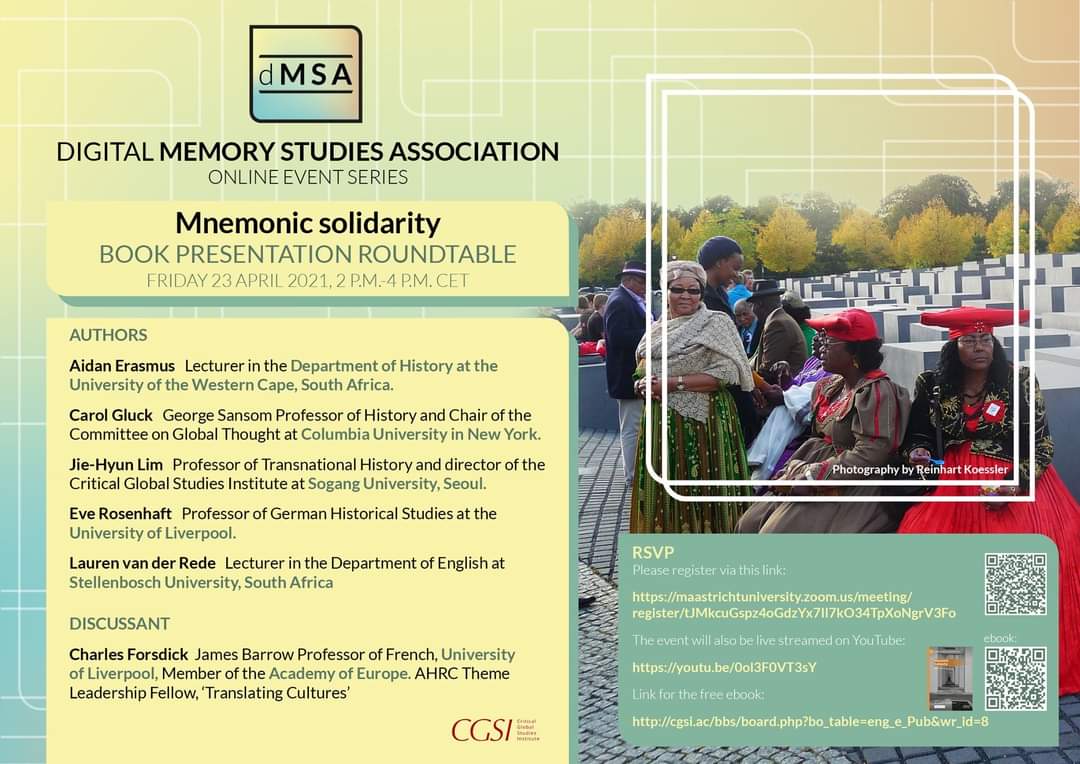 In this book presentation roundtable, the five scholars behind the recently published book “Mnemonic Solidarity: Global Interventions” will present their findings and highlights. Their work, part of Palgrave’s Entangled Memories in the Global South series, explores the work of globalisation on the landscape of memory, focusing on Europe, East Asia, Africa and the Middle East. Their conversation will be guided by Charles Forsdick.
You can register for this event here: https://maastrichtuniversity.zoom.us/.../tJMkcuGspz4oGdzY...
The event will also be live-streamed: https://youtu.be/0ol3F0VT3sY
Download the free e-book here: http://cgsi.ac/bbs/board.php?bo_table=eng_e_Pub≀_id=8
Co-organised by Sogang University's Critical Global Studies Institute as part of dMSA, the Memory Studies Association’s online event series.
_________________________________________________________________

Aidan Erasmus is a lecturer in the Department of History at the University of the Western Cape, and completed a Ph.D on sound and the historiography of war in South Africa in 2018. His current research is focused on comparative histories of race, technology, and sound in Africa, with specific attention paid to intellectual histories of language, media, and memory. His current research project is on the interpretive role of sound in the transnational work of the southern African intellectual and activist, Sol. T. Plaatje.
Carol Gluck is the George Sansom Professor of History at Columbia University. She specializes in modern Japan, from the late nineteenth century to the present; international relations; World War II, and history-writing and public memory in Asia and the West. Her work in memory includes Senso no kioku [War memory], 2019; Past Obsessions: World War II in History and Memory, forthcoming; articles on the “comfort women,”, national history, and global memory. She is on the advisory board of the Globalized Memorial Museums project (Vienna) and the editorial board of the new journal “Memory, Mind, and Media.”
Jie-Hyun Lim is Professor of Transnational History and Director of the Critical Global Studies Institute (CGSI), Sogang University (Seoul). He used to be a global historian working on Poland and East Asia. Recently, he has been shifting towards the history of global memory with a keen interest of how to overcome the Eurocentricity of the memory studies. He is the principal investigator of the multiyear research project of “Mnemonic Solidarity in the Global Memory Space-On Colonialism, War, and Genocide.” Series co-editor of the “Entangled Memories in the Global South” at Palgrave. His recent books include “Memory Wars: How did perpetrators become victims?”(Humanist, Seoul, 2019), “Mnemonic Solidarity-Global Interventions” (Palgrave, 2021) co-edited with Eve Rosenhaft, “Victimhood Nationalism-A Global History” (Humanist, Seoul, 2021-English version is under preparation), ” “Global Easts: remembering-imagining-practicing”(Columbia University Press, forthcoming).
Eve Rosenhaft is Professor of German Historical Studies at the University of Liverpool. A member of the Academic Advisory Board of the Institut für Zeitgeschichte, Munich, she has taught and published widely on aspects of German social history since the eighteenth century. Recent books include Black Germany: The Making and Unmaking of a Diaspora Community 1884-1960 (Cambridge, 2013) and Slavery Hinterland. Transatlantic Slavery and Continental Europe 1680-1850 (Woodbridge, 2016). Her work in memory studies and public history has focused on Black and Romani victims of Nazism, and has involved working with the United States Holocaust Memorial Museum, the Imperial War Museum London and German and South Korean memory activists and collaborating with film makers and theatre practitioners.
Dr. Lauren van der Rede is a lecturer in the Department of English at Stellenbosch University, South Africa. Her research is concerned with the intersection of genocide, literature, cultural studies and psychoanalysis, from and through Africa. In taking its cue from the literary, as a mode of reading, her work seeks to think what might be at stake in a reckoning with genocide, beyond phenomenon. She received her PhD in Literature from the University of the Western Cape, where she was also a Next Generation Researcher based at the Centre for Humanities Research (CHR).
Charles Forsdick is James Barrow Professor of French at the University of Liverpool. He has published on a range of subjects, including travel writing, colonial history, postcolonial and world literature, and the memorialization of slavery. Recent books include The Black Jacobins Reader (Duke University Press, 2016), Toussaint Louverture: Black Jacobin in an Age of Revolution (Pluto, 2017), Keywords for Travel Writing Studies (Anthem Press, 2019) and Postcolonial Realms of Memory: Sites and Symbols in Modern France (Liverpool University Press, 2020). He also co-edited a special collection of Modern Languages Open on ‘The global crisis in memory: populism, decolonisation and how we remember in the twenty-first century’ (2020).